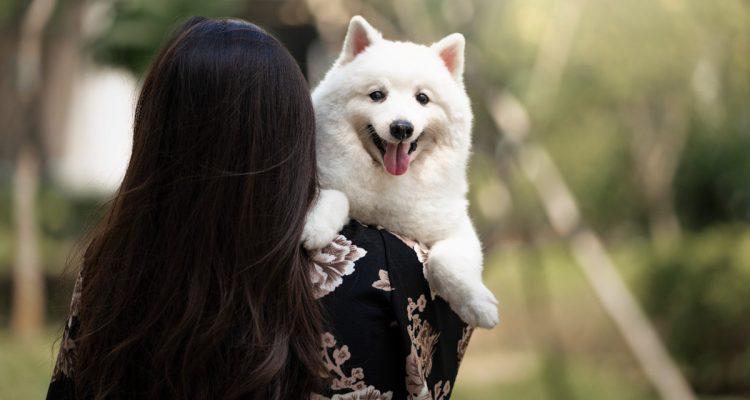 clubpets on February 6, 2022 No Comments

We’re pretty sure most of you have dreamt of being a model at least once in your life (we did too…). Who knows? Perhaps your fur pals, who are prettily looking out the window, are dreaming of becoming a model too!

Over the past few months, Antinol has been on a hunt for their next cover model. While on their quest for a photogenic Antinol user, many beautiful photos of your lovely pets were received. It was a difficult task deciding on the winners and sadly, only 3 could be chosen… However, we know that from the endless care and love that you are showering your furbabies, all of them are winners!

We’ve had the opportunity to speak to the pawrents of the 3 final winners and are delighted to share with you the incredible stories behind these furbabies.

When you look up a Japanese Spitz, you will be blasted with countless images of a smiley, cheerful and gorgeous white dog. Like any other Japanese Spitz, Dee is a very smiley and joyous dog too. At 11 years old, Dee is no less energetic and quirky than other dogs. In fact, Dee was described to be a very cheeky boy. Dee’s parent, Nga Kei, had mentioned that Dee often likes to mimic their older dog by limping along behind, causing their family to erupt in laughter.

When asked what her favourite characteristic of Dee is, Nga Kei brought up how Dee acts like a peacemaker in the house. Often when tensions are at their peak in the house, Dee will step in and ease the heightened tension. Perhaps this is a testament that dogs can in fact sense our emotions!

In order to spend more time bonding with Dee, Nga Kei said that she will make a conscious effort to try and include him in everything that she does. For example, they would often go run errands together, or go to the pet shop together to pick up his food. Nga Kei shows us that there is more than one way to connect and bond with your pet!

Being an animal communicator has definitely helped Nga Kei understand Dee better. Nga Kei mentioned an instance whereby Dee was having some discomfort in his ear. Unlike other dogs who can only suffer silently, Dee managed to convey his discomfort to Nga Kei’s sister who then helped him check on his ear.

When Dee was diagnosed with a luxating patella, Nga Kei immediately sought out treatments for him. To alleviate the strain on Dee’s joints, Nga Kei brought him for regular swim sessions. Initially, a staff at the swimming place was sceptical about Dee’s swimming abilities, stating that Japanese Spitz are usually bad swimmers. However, Dee proved her otherwise when he immediately started paddling like a pro upon entering the water. The staff was left speechless!

Given that Nga Kei has seen the positive effects of Antinol on her other dog,  she also started Dee on Antinol in addition to his regular swimming lessons,

Prior to his swimming exercises and Antinol, Dee could only walk for short distances and Nga Kei would often need to put Dee on a wagon or stroller.  With the inclusion of Antinol, Nga Kei has seen a significant improvement in Dee, such as stronger legs and better mobility. Both Nga Kei and Dee can now enjoy walks of up to an hour!

Dee is not the only dog that saw notable improvements with swimming exercises and Antinol. Our next paw-del, Asher, is also enjoying the benefits of Antinol. 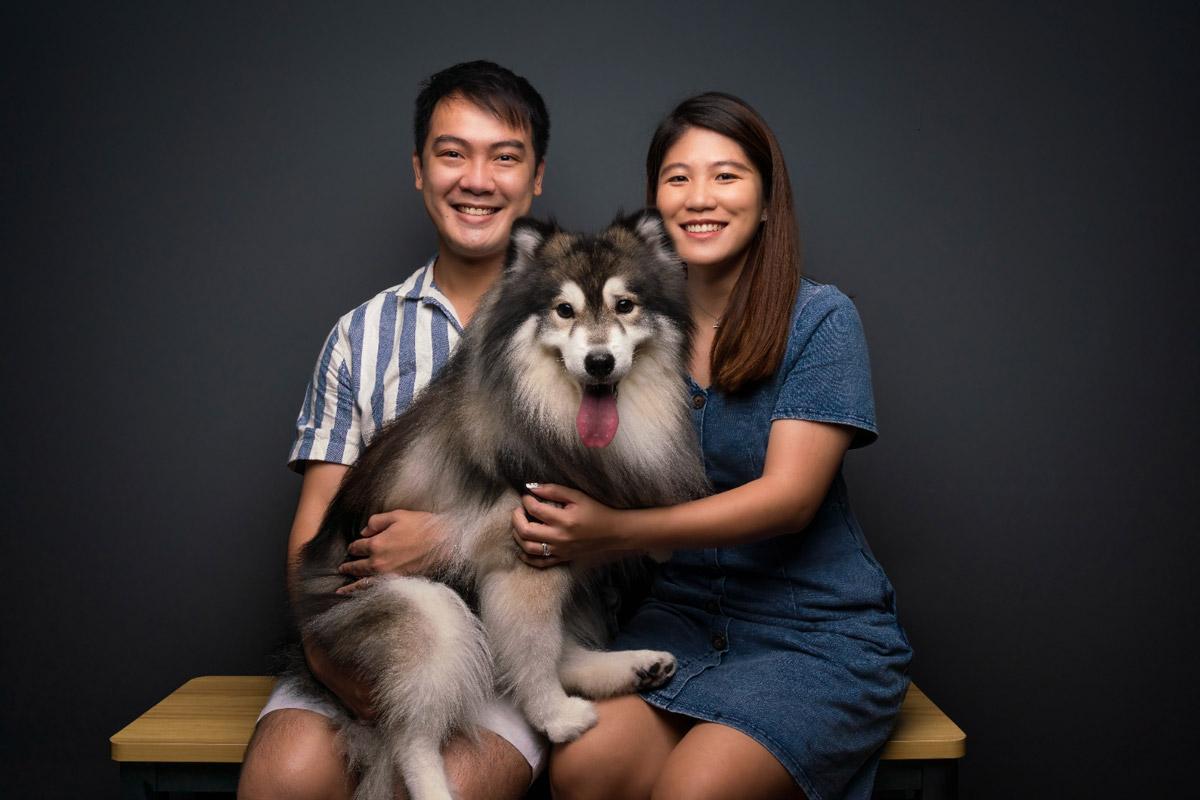 You’ve probably heard of Pomeranians and Siberian Huskies. But have you heard of a Pomsky? A Pomsky is essentially a designer breed of dog that is a cross between a Pomeranian and a Siberian Husky. Since Pomskies are fairly uncommon, it is not surprising that most of us don’t know what they are. In fact, Asher’s parent, Rachel, also had no idea what a Pomsky is initially.

Since Rachel and her hubby already has a Sheltie, getting another dog was never on their agenda.   However, after seeing a Pomsky online, they were intrigued.  In their attempts to find out more about this breed, they saw Asher and it was love at first sight!

When asked what are the characteristics of a Pomsky, Rachel tells us that “a Pomsky is basically a good mixture of a Pomeranian and a Husky. So [for] Huskies, they are very independent, tend to be aloof sometimes, they are in their own world, they have their own mindset. I see that in Asher sometimes. And the Pomeranian part is when he is very eager to please, full of energy.”

Rachel goes on to elaborate that on certain days, Asher would be super energetic, super happy and bouncing around the place. While on other days he would not want to interact with them and would ask them to leave him alone. Rachel thinks that Asher has “a fine balance” between a Pomeranian and a Husky.

Sharing personality traits from both Pomeranians and Huskies, Pomskies are generally very playful, intelligent and have an affectionate and loving nature. Asher, like most Pomskies, is also very cheerful and outgoing. Truth be told, Asher’s constant smiley face is Rachel’s favourite characteristic of him. Even while being scolded, he maintains his smiley face! As such, Rachel’s anger would quickly dissipate and she could never continue scolding him.

Interestingly, what made Asher’s parents notice weakness in his hind limbs was through a Veterinary Science course that they attended. While in this class, Asher’s parents were taught how pets walk, including how to look out for potential issues. They then realized that Asher exhibited some signs of potential ailments and decided to bring Asher to the vet to confirm his condition. See? Who said what we learnt in school would not be helpful in real life? 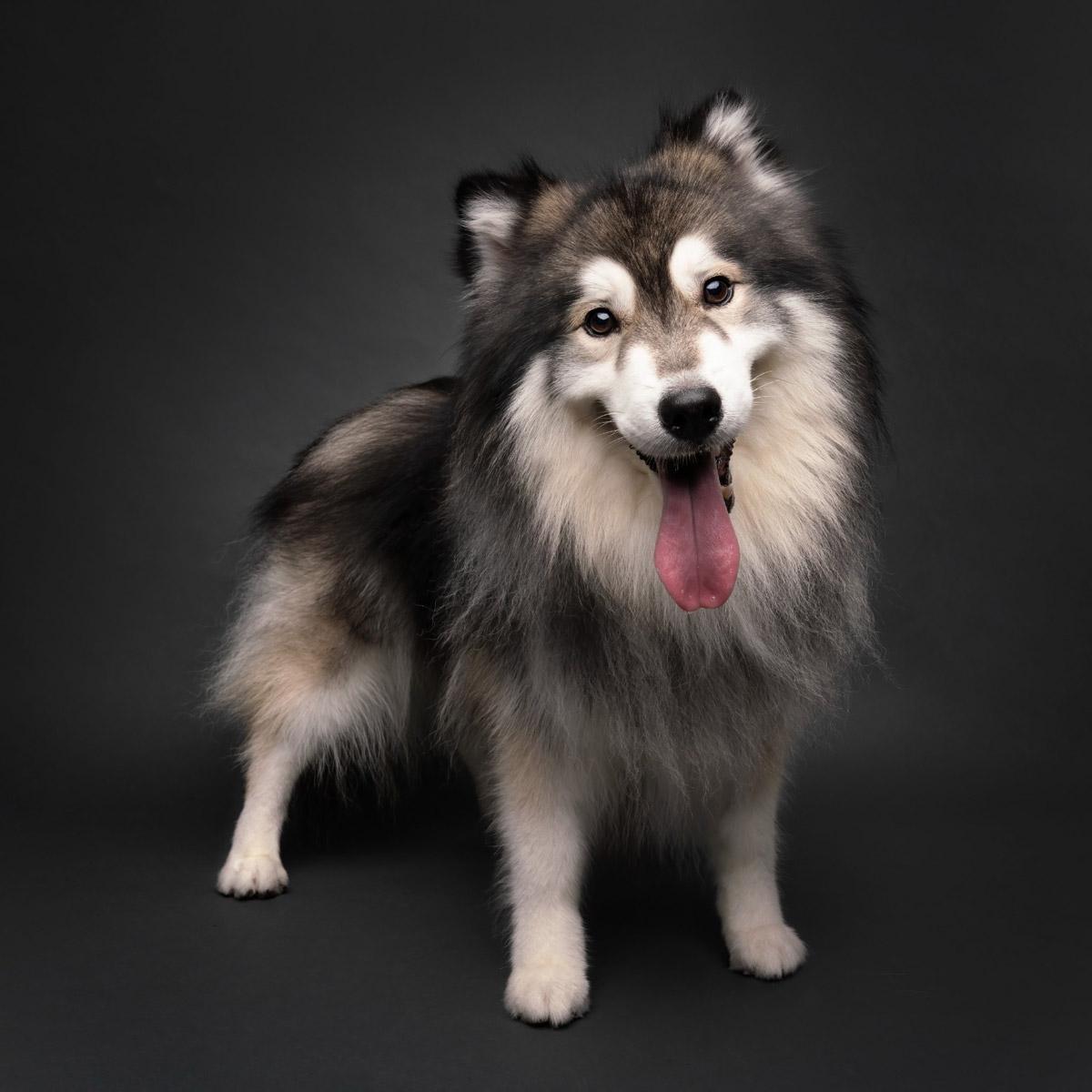 Physiontherapy is a good way for dogs to build up their muscle strength to support their joints but getting dogs to do their physiotherapy usually involves motivating them with treats.  Given that Rachel is not too keen on feeding Asher with too many treats, she decided instead to start him on hydrotherapy which is not only beneficial for Asher but loads of fun too.

Antinol was also introduced into his routine. Initially, Asher was quite suspicious of the tiny gelcap so Rachel had to pierce the gelcap or hide it in his food to get him to take it. But, now, he readily accepts Antinol. In fact, he eagerly waits for his Antinol gelcap, thinking it is a treat!

When asked if they would recommend Antinol to other pet parents, Rachel remarked: “Ya, I definitely will. I feel that Antinol is really wholesome, it’s very rich and has all the good ingredients inside.” They even recommend it for pets without any joint issues since it can be taken as a supplement to prevent possible joint ailments.

Antinol is not only a joint supplement for dogs. Our next paw-del, can consume Antinol too! 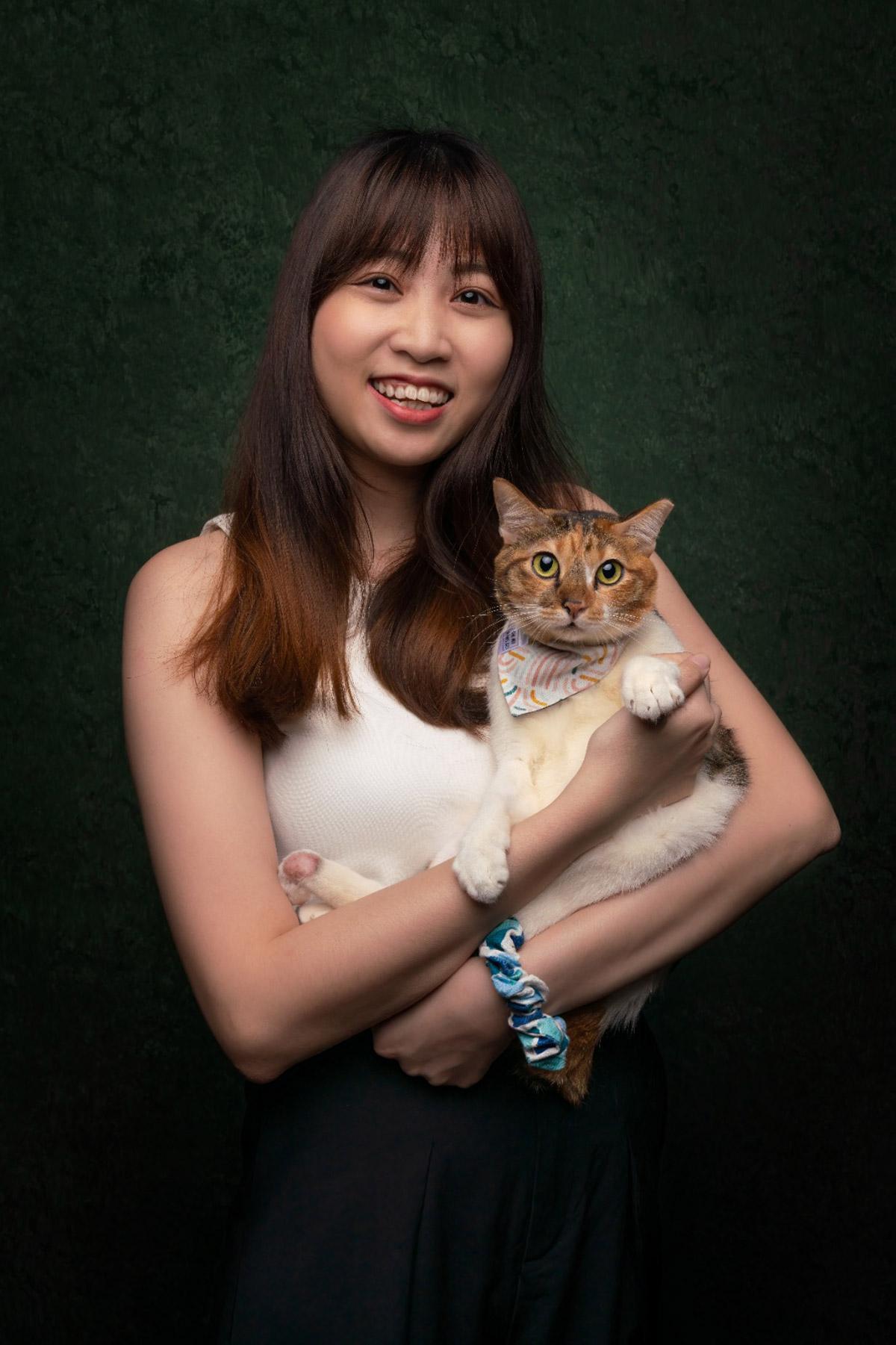 Our final paw-del is very different from the other two. She’s a cat!

Gojiberry is a 3-year-old domestic shorthair calico. We’re pretty sure most of you have seen at least a picture or video of a cat getting obsessed with random objects like plastic bags or straws. However, Gojiberry isn’t like other cats! She has a very specific preference. Instead of random objects, Gojiberry loves to play with toy mice! According to Natalie, Gojiberry is usually very “princessy” and she doesn’t like to interact with just any object. Therefore, they have a range of toy mice just for Gojiberry to play with.

Her princess-like attitude also carries over when taking photos. Just like you see in her pictures, Gojiberry is undoubtedly very photogenic. When asked how she gets Gojiberry to sit down and pose for the pictures, Natalie commented that Gojiberry is already used to it. Natalie further mentioned that “normally when [Gojiberry] sees me display products, she will automatically sit beside it and get ready”. However, giving Gojiberry enough time to prepare herself is a must! Natalie remarked that if they were to suddenly grab Gojiberry for a photoshoot, she would sulk and refuse to look into the camera. Apart from that, it can be said that being a paw-del is in Gojiberry’s blood.

However, unlike her gorgeous appearance and sweet demeanour, Gojiberry’s past has not always been so beautiful. Gojiberry used to be a stray kitten before she was taken in by Natalie’s brother. Unfortunately, as a stray, she had gotten into several incidents that left her scarred and in pain. One such instance was when she was attacked by stray dogs/cats.  Despite undergoing surgery, one of her hind legs remain limped due to severe nerve damage. Although amputation was recommended, Nathalie did not wish to consider it for Gojiberry..

One day, while scrolling Instagram, Natalie came across Antinol’s page and got intrigued. She got in touch with the good folks of Antinol SG to find out if Antinol would help Gojiberry regain the use of her hind limb.  It was explained to her that Antinol would not be able to help restore the use of the affected limb given that the damage was likely to the nerves.  However, Nathalie could consider giving Antinol as a preventive to help support the rest of Gojiberry’s joints.

With this advice, Natalie started Gojiberry on Antinol. Like a lot of other cats, Gojiberry, is a very picky eater and getting her to eat the Antinol gelcap which was placed in her food wasn’t easy. Natalie mentioned that Gojiberry is so picky with her food that she would rather not eat if it is something that she doesn’t like. When there is a will, there is always a way and Natalie found that popping the gelcap into Gojiberry’s mouth is the easiest, fastest and surest way to ensure she gets her daily dose of Antinol.

Even though Gojiberry has only been on Antinol for about 2 months, Natalie has noted a significant increase in Gojiberry’s energy level and appetite.  Unlike in the past where Gojiberry would ignore her other cat Namu or ask him to go away, Gojiberry now likes to disturb and chase him.

When we think of cats, we don’t necessarily think of them as clingy pets. But cat parents will tell you that cats can actually get very clingy too. That is the case for this paw-del. Gojiberry has gotten so attached to Natalie that she would constantly meow whenever Natalie is not home. Aww…

We are very honoured to be able to share the stories behind these 3 paw-dels and the amazing bond they have with their humans.. It is also heart-warming that these 3 beautiful paw-dels did not let their conditions define who they are. Instead, they let their personalities shine through, and we think we can definitely learn a thing or two from them.