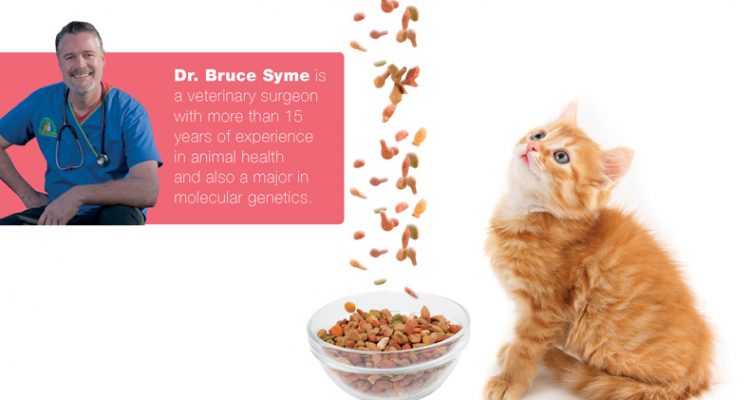 The best diets boost your furry friend’s health development. DR BRUCE SYME shares whether to integrate grains into their diet.

For those of you who have been reading and researching information on natural diets for dogs and cats, it is time to set the record straight on the issue of grains. There is conflicting information being published on the use of grains, as part of a natural diet. Some vets advocate no grain at all but lots of vegetables, and some believe a diet based on just raw meaty bones is all a dog needs. Others recommend a small portion of grains in the diet. So what is the truth?

The basic controversy has arisen because of the very high cereal content used in processed pet foods. Many canned and dry dog foods contain up to four times as much cereal content as meat. This cereal is cleverly flavoured with meat render (boiled offal and carcass remains), and is often disguised as “meaty chunks” using food dyes and gums. The simple fact is that dogs and cats are not designed to eat such a high content of highly refined starch (cereals ground into flour). These cereal flours are used as cheap fillers, to bulk out the pet food, and increase profit (decrease manufacture costs) as meat proteins are very expensive. Cheap starch has little nutritional value, except for calories, and can result in a diet with too much refined sugar.

It is this fact that has lead some vets and nutritionists to broaden the issue on cheap carbohydrates, to encompass grains in general. But this is not true. I agree that cheap carbohydrates used in commercial pet foods are not good for health, but this does not mean that dogs and cats do not actually eat some grains.

We must remember that both dogs and cats often do ingest grains when they catch and eat live prey. The natural source of prey for dogs and cats is generally herbivores. When a dog catches its prey, it will first eat the organs and then the gut content of the prey animal, which is full of semi-digested plant and grain material. This can make up almost 30 per cent of the weight of the prey animal. After this feast, they finally eat the meat and bones. The order in which they consume the prey is a simple and clear indication that the grain/vegetable content of the diet is vital to their health. Why else would they eat it first?

Dogs are considered omnivores, not obligate carnivores (unlike cats). This means that they are able to survive on a diet that does not contain meat. The most basic indication here being that they can survive on a diet of plant based material… grains, fruit, vegetable matter etc. It simply stands to reason that if an animal can survive like this, then their bodies must be fully equipped to digest and process these types of food groups.

An important point to mention here is that dogs and cats cannot digest whole grains. They do not graze fields of barley and eat the grains. What they do is ingest the grain from the gut content of the prey animal. This grain has all ready been chewed, partially digested, and has been fermenting in the animals gut at 38.5 Degree C. Presented like this, a dog or cat can now easily digest the grain material. The same goes for plant material. Dogs and cats have a poor ability to digest intact plant material (they lack the enzymes to digest the cellulose plant cell wall). When they eat plant material, it is either direct from the gut of the prey, predigested, or they scavenge old composting vegetable matter, which is auto-digesting (decaying). The same goes for fruit material. Dogs generally eat fruit off the ground, not off the tree, where it has all ready ripened, and started to decay.

The only time cats and dogs can digest fresh plant material, is when they eat very young shoots. If you watch them eat grass, for nutrition, not as a means of making themselves sick, they are very selective, eating only the very fresh green shoots, not the bigger, greener leaves. This is because the new shoots have a thin cell wall that can be digested, whereas older plant cells develop a tough, indigestible, lignified cell wall.

Cats are true carnivores, which means they must eat meat to survive. They are not scavengers like dogs, and will only eat fresh prey. They do eat the gut content of their prey (grains and all), like dogs, and do consume small amounts of fresh green plant material, but in general, their diet is much higher in fresh meat content. Grain material would make up only 10 to 15 per cent of their diet.When I developed my grain/vegetable mix (Complete Mix), I modelled it on the way dogs and cats would naturally eat grain. The grains are crushed/ cracked, the vegetable matter finely chopped or powdered. The mix is soaked (fermented) just as it would be, in the gut of the prey. The carbohydrate in the grain is then readily digested by the dog or cat. The nutritional value of the whole grains are preserved, and not damaged by processing and bleaching, as is the case with cereal flours. The amount of grain/veg to meat has been carefully calculated to meet the energy and growth requirements of the animal, and its natural dietary intakes. The cat mix has only 10 per cent grain/vegetable matter (dry weight), and the dog mixes vary from 15 per cent (puppy) to 20 to 25 per cent for adult and senior dogs. This is an accurate reflection of the normal carbohydrate intake of a wild dog, and is presented to the dog in a state that it would naturally digest it.

So the final word on grains. They are ok, as long as they are unprocessed, cracked or crushed, pre-fermented, and make up a much smaller portion of the diet than the meat content. It may be true that some dogs and cats may fare better on a diet with little or no carbohydrate, but on the whole the are a valuable source of nutrition.

How Should You Care for A Deaf Or Blind Pet?

Are You Guilty of Making Your Pet a Picky Eater?

3 Reasons Why You Need to Start Shopping for Pet Supplies ASAP on Clubpets’ E-Store!

Driving with Pets: A Guide to Helping Your Dog & Cat Get Used to Car Rides

9 Christmas Gift Ideas for Your Dog to Defend Your Title as ‘The Favourite Hooman’!