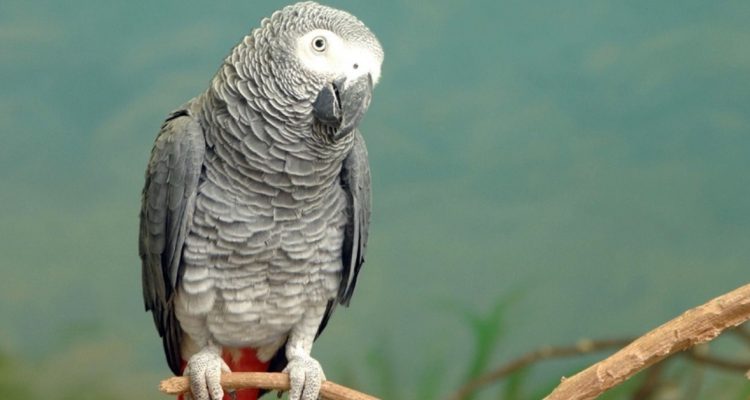 If you are a bird lover, you may be familiar with African Greys. They are a species of parrots and are characterised as some of the most sophisticated birds known to mankind. With sufficient time and energy invested into taking care of them, they can prove to be excellent companions.

However, African Greys can throw quite a few tantrums when neglected. Be prepared to face some screaming, yelling and even potentially biting if they ever lose their trust in you. As a result, while adorable, these birds can definitely be a handful at times. That’s why proper research is needed to know what you’re getting yourself into before committing to looking after this feathered flock!

Read on to find out how an African Grey may display diva-like behaviours in a multitude of ways.

Mealtimes May Be A Climactic Event 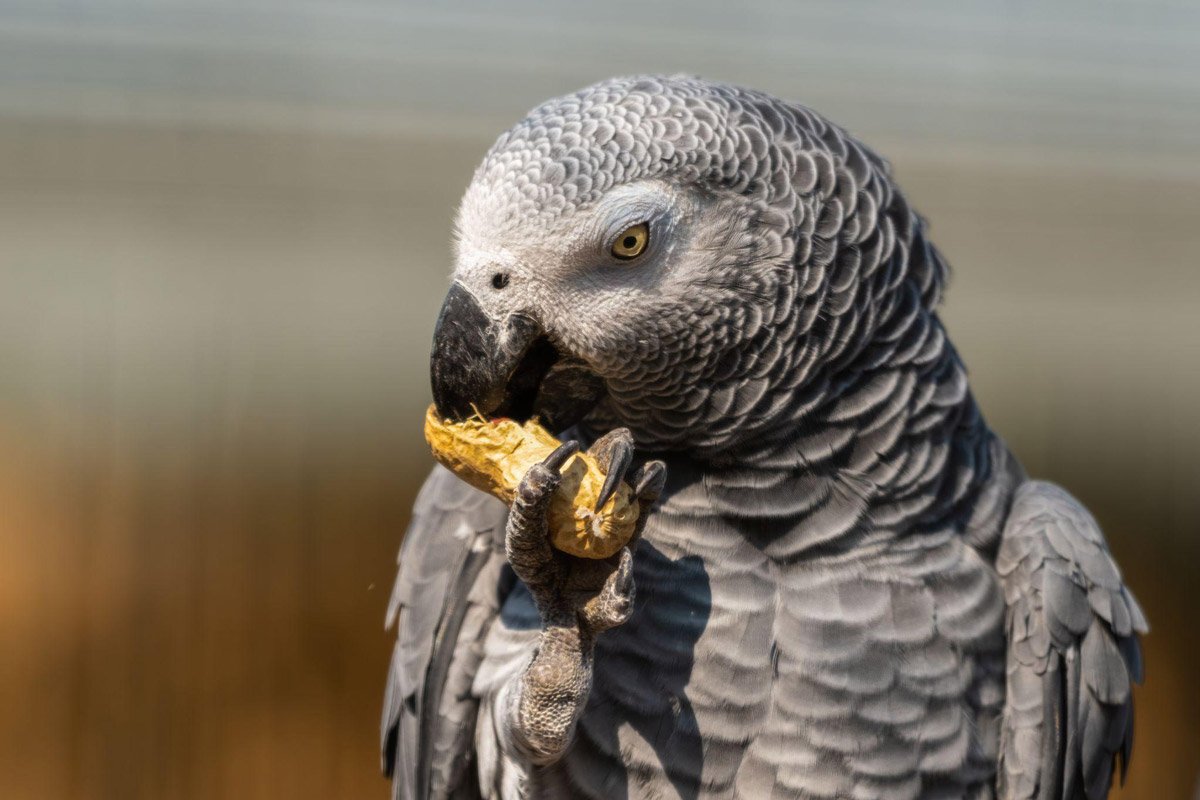 Feeding an African Grey can be as entertaining as they are frustrating at times.

On a good day, you’ll face a lovable fluff ball that will nibble at treats held in your hands gently. However, the possibility of accidentally triggering or annoying your parrot and making them snap at your fingers is also very real. And don’t be fooled; a parrot’s bite is not to be underestimated given how strong their beak is.

A parrot’s bite can exert pressure ranging anywhere from 300 to 400 PSI. For scale, a tiger and a grizzly bear have bite forces of 1050 and 1200 PSI respectively. A ferocious crocodile comes in at an astounding 5000 PSI. So if you think about it, a parrot’s snap is seriously no joke!

Moreover, there are different types of bites depending on the parrot species. Conures and Monk Parakeets are notorious for small, puncture bites. Amazon parrots deliver terrifying twisting bites that can inflict fairly severe wounds due to their lack of bite inhibition.

But worst of all, African Greys take the cake with their chewing bites — they don’t just bite once, but bite repeatedly. They show no mercy to the skin on your hands by chewing it in a “corn on a cob” motion. If you don’t free yourself from their bite’s grasp quickly, you won’t have much skin left to miss.

On top of that, African Greys are not known to be docile parrots like Hyacinth Macaws. Therefore to be an owner of an African Grey, you need to be able to handle some volatility in terms of their behaviours. These temperamental birds are prone to mood and behavioural shifts, especially in the absence of trust between owner and bird. 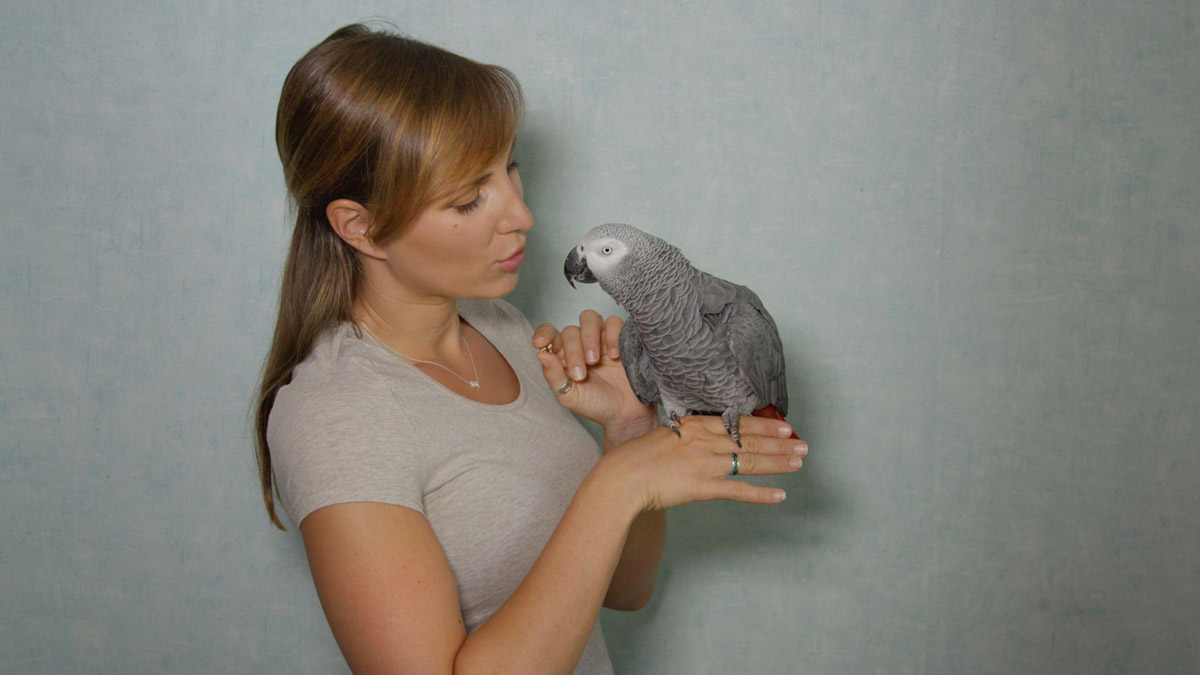 African Greys are extremely social creatures, but only when they want to be.

Happy and healthy African Greys will display their desire for socialisation through various body language cues like standing upright on their perch, regularly preening themselves, head bowing, relaxed feathers and even beak grinding.

It’s important to be observant and sensitive towards your parrot when it’s in a good mood. Seize these pockets of opportunity to let it out of the cage for some good old bonding sessions. We assure you, your parrot will be just as happy to spend quality time with you!

With that said, also be aware of your parrot’s mood shifts. Sometimes you might receive a rude wake-up call on a ridiculously early morning as your avian friend demands to be let out of its cage just to decide that it wants to go back in. (Yes, birds can be indecisive and meddlesome like a cheeky toddler too!)

It may be tempting to ignore the screeching and leave your African Grey alone, but that is probably the worst thing to do in such a situation.

African Greys will scream in moments of distress and frustration. So, leaving them to their own devices when they are seeking attention is only a recipe for disaster.

As a form of sweet revenge, when you don’t give them the attention they want, you may see chewed up newspapers and towels that once lined the cage now lying on the floor in an unidentifiable mess.

In any case, try to diffuse your bird’s tantrum as quickly as possible by soothing its nerves with a treat or two, or you might just have to clean up an additional pile of defecation too.

They Are Touchier Than You Think 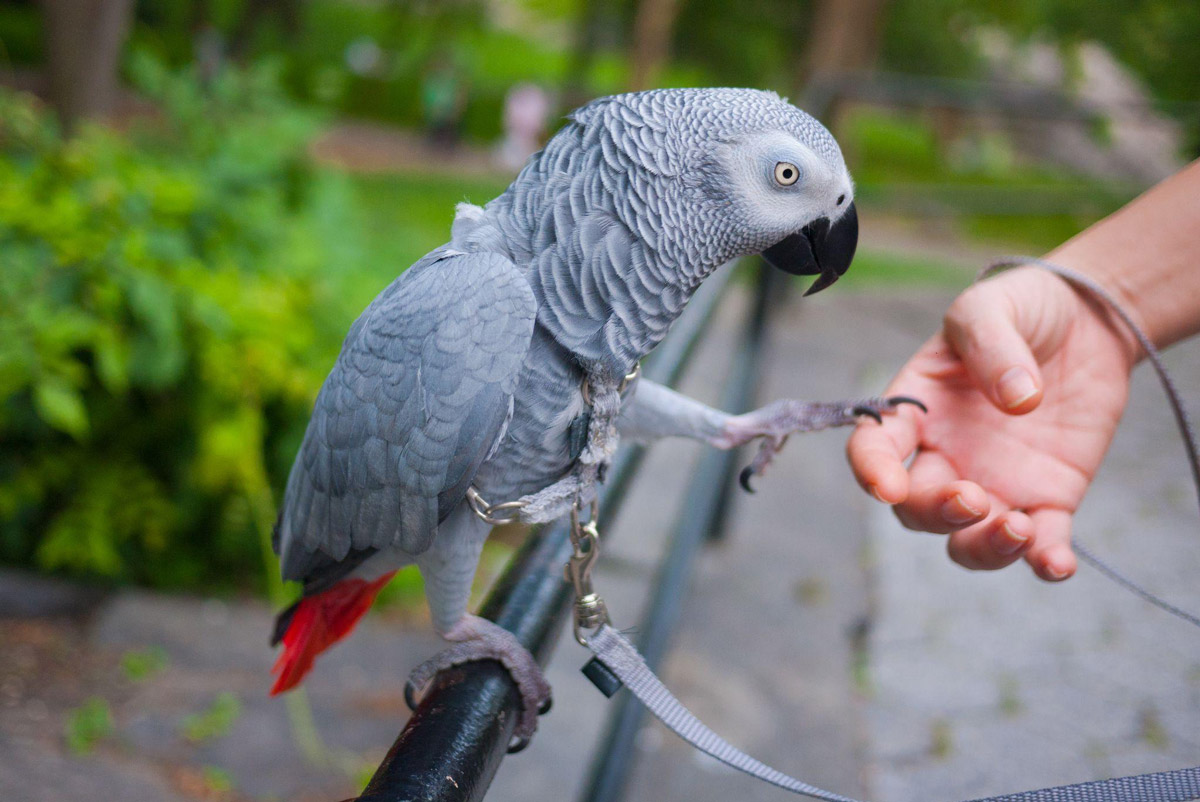 Okay at this point, you might be wondering why on earth any sane person might want to keep an African Grey as a pet, but don’t let the aforementioned scenarios scare you!

While temper tantrums are common enough, a tame African Grey is also sweet, affectionate. You will rarely face a situation where cuddles and head scratches are denied by them. However, you obviously have to do it the right way to prevent inciting a dramatic reaction from them.

The unwritten parrot rule for head scratches is to scratch in the opposite direction of feather growth and to always stick to the head and neck. Some signs of a happy and content African Grey include relaxed feathers and head bowing.

A happy and comfortable African Grey may also sing or purr in your presence, fluff its feathers, wag its tail and even blushing or regurgitate its food for you; but those are all signs of how much it loves you!

The ‘Einstein’ of Parrots 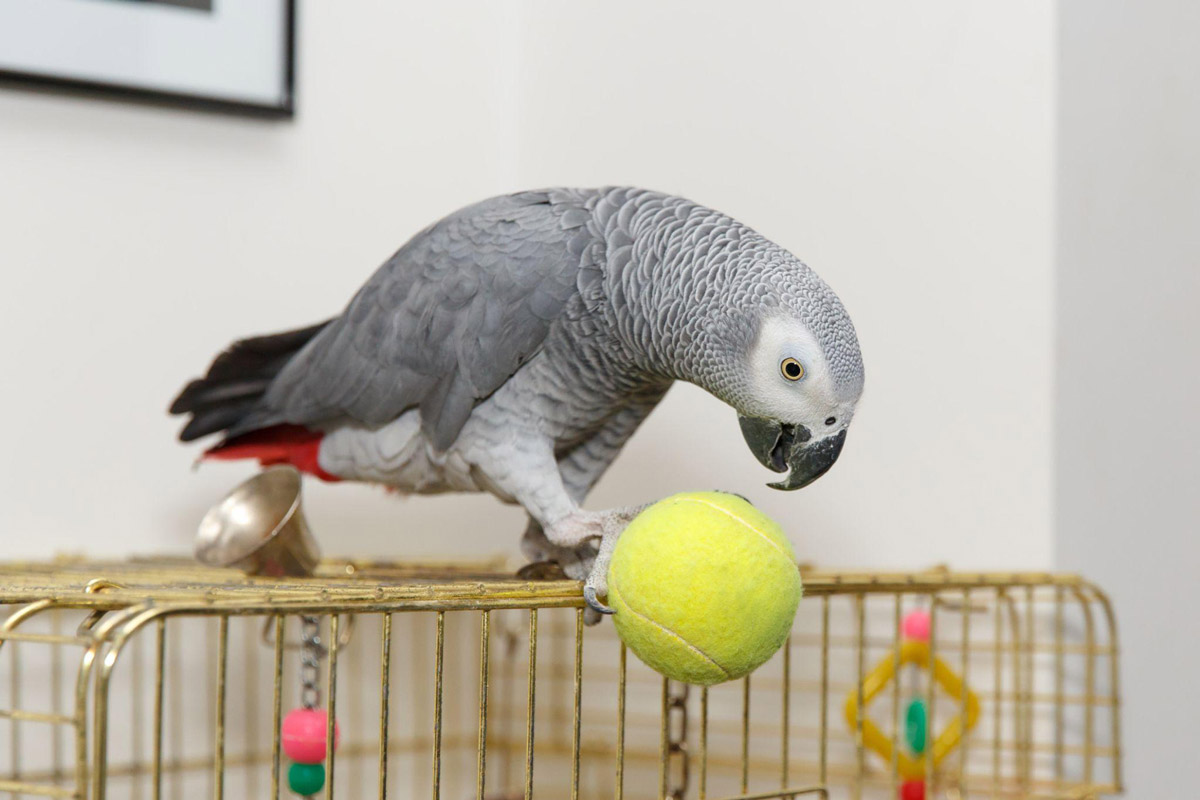 Furthermore, African Greys have demonstrated commendable intellect as seen in the case of Alex, the African Grey. Alex was part of a thirty-year experiment conducted by psychologists to explore avian learning and language-learning abilities.

Throughout the course of its life, Alex was believed to have attained various aspects of intelligence comparable to a 5-year-old child — capable of answering questions for six-year-olds and acquiring a vocabulary of over 100 words. But even more surprisingly, it exhibited emotional intelligence and grasping semantic-pragmatic associations in object identification.

But all in all, African Greys are still animals at the end of the day. Their animal instincts will always prevail over perceived intellect.

Thus, observing their body language (like being cautious around their wings) and behavioural cues are key to preventing messy encounters. Parrots are very particular about personal space and can get defensive if you go overboard, resulting in another loud, frenzied fiasco involving food flinging and yelling. 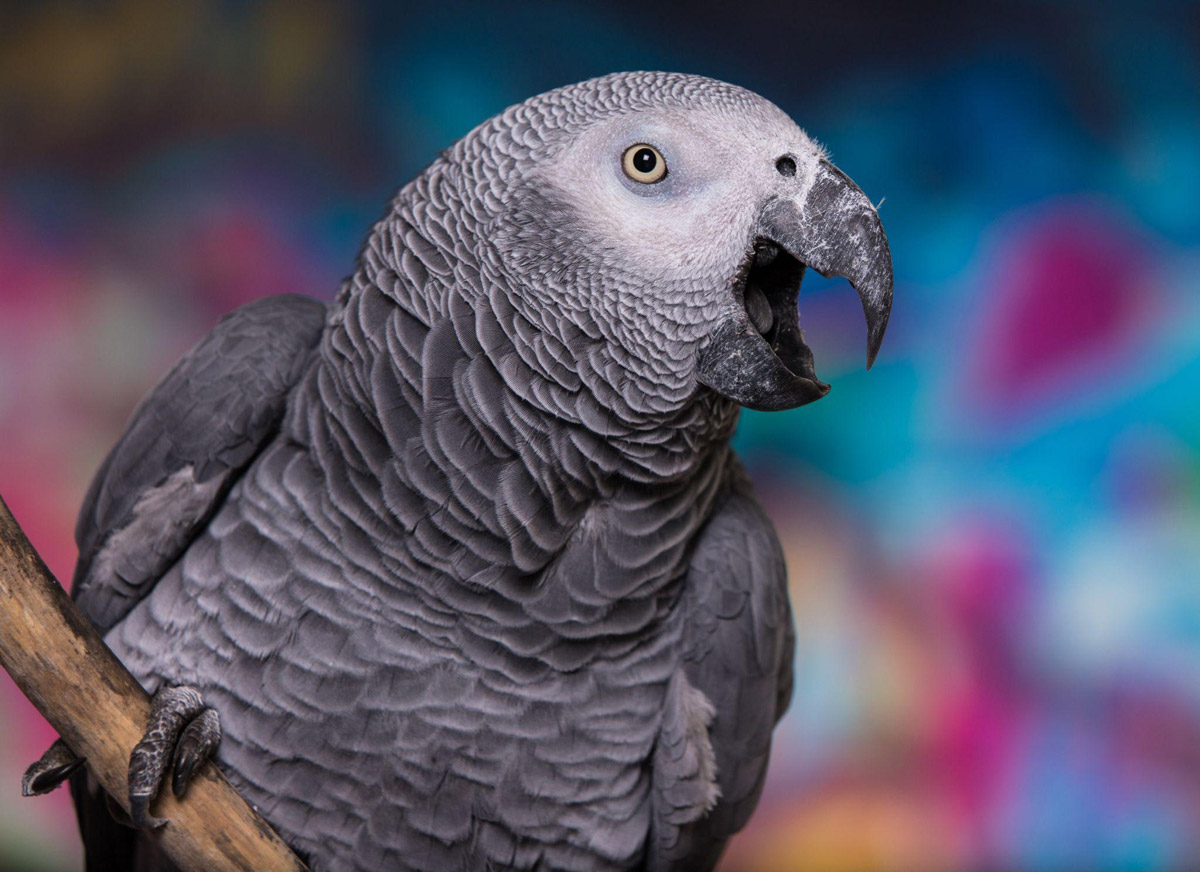 African Greys are amazing companions, with a lifespan reaching an amazing 45 years for those in captivity. Moreover, their intelligence speaks for itself, having gained the recognition of being the ‘Einsteins’ of parrots.

These feathered creatures deserve every bit of care and attention to survive and thrive, so only take on the challenge only if you are fully invested! As with any pet, taking care of a bird is no simple undertaking. The onus is on us to do the proper research and preparation to give them a loving home.

Once you’re armed with sufficient knowledge and plenty of confidence, check out your pet shops in Singapore that carry this unique breed as you begin your journey with your new friend. We promise you, it’ll all be worth it.