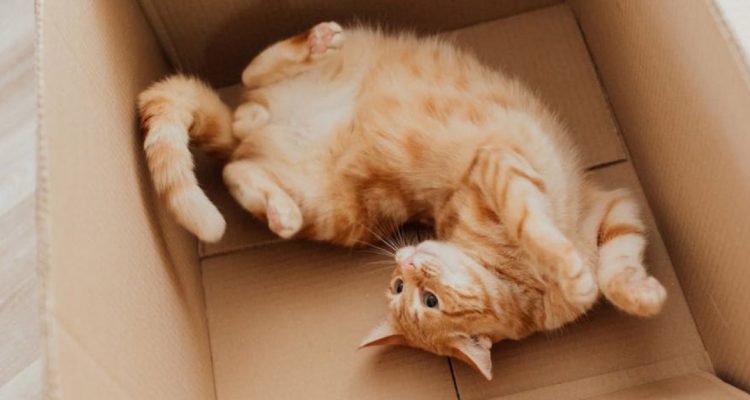 If you’re a cat owner, you have most probably noticed that your feline friend loves cardboard boxes so much.

In fact, between an amazing new toy and a simple cardboard packaging — chances are, your cat would most likely choose to just indulge themselves in the pleasure of a box. At this point, it’s become a well-known fact among pet owners that cats indeed love to spend their time playing with a box at any time of the day.

But what exactly is interesting about cardboard boxes that make them so appealing in the eyes of cats? Why does your feline companion keep on returning to that wobbly, chewed-up box that has been sitting on the floor for weeks?

If you are curious, give this article a read as we aim to explore the corners and depths of this fascinating realm of kitty psychology. 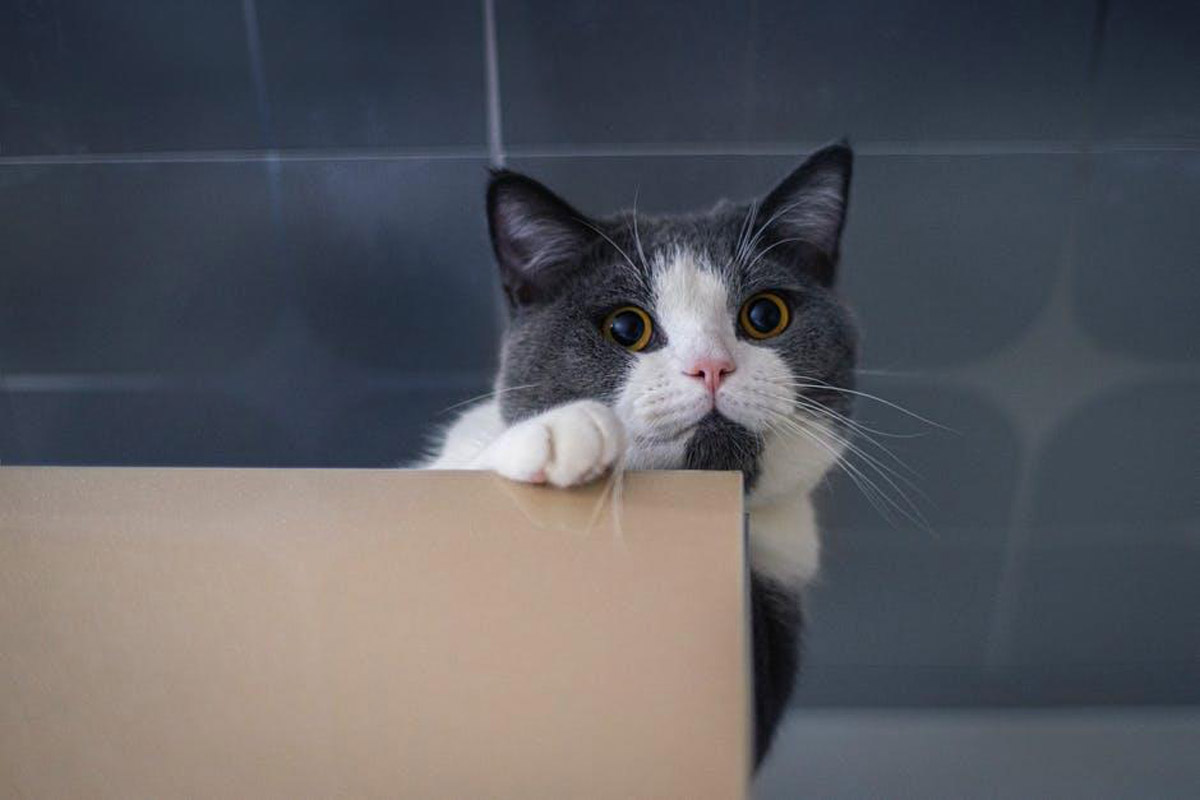 This is probably the simplest reason why cats are greatly drawn to boxes — they are just fun to play with!

Similarly to human children who like making fortresses out of boxes, perhaps cats also enjoy living inside a box as if it were their mighty castle. After all, a cardboard box is comparatively bigger than a cat.

Within its paper-based exterior, a cardboard box is your cat’s hidden refuge in which it can roll around, jump in and out, pounce on the toys you have given them.

If you want to make the paper domain more interesting for your furry friend, you can even cut a window or door shape out of the cardboard box.

Cats Feel Secure Inside a Box 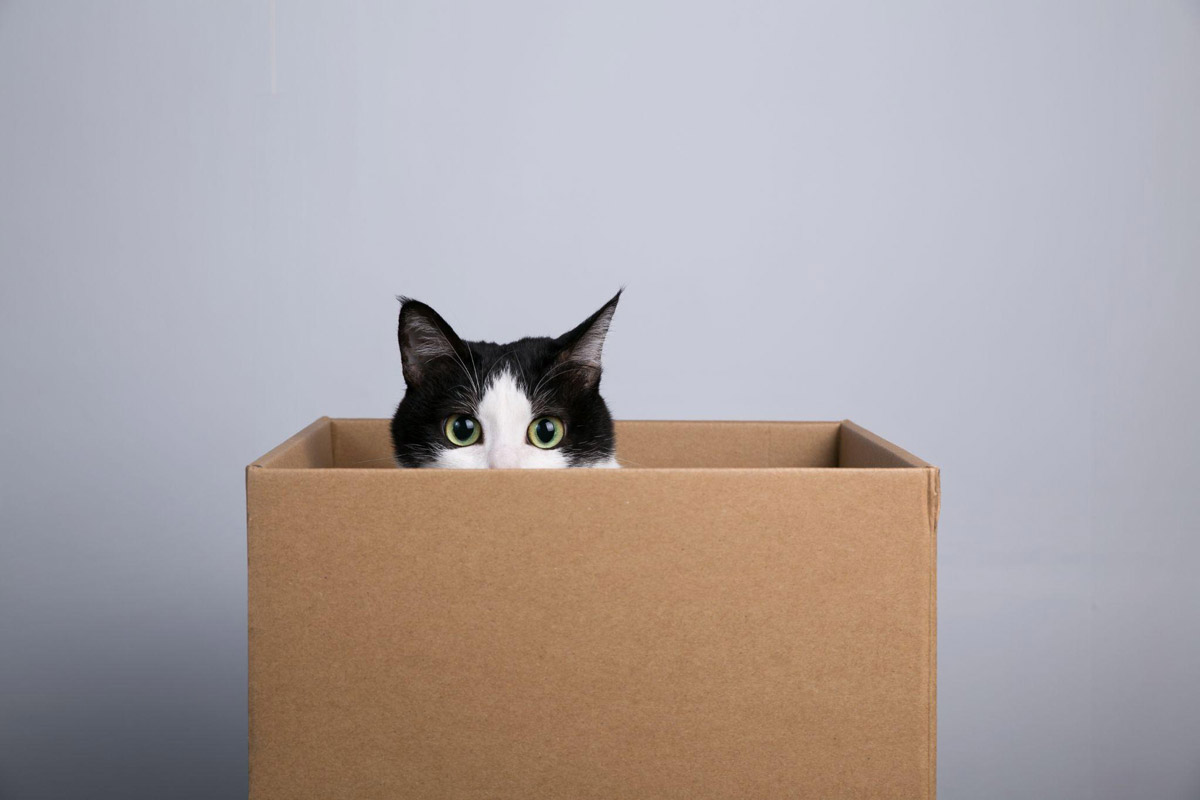 Apart from the fun, cats love staying inside a cardboard box because of the sense of security that it brings them. Like humans, cats seek safety and security all the time. They always want to be sheltered in a space that can shelter them from fear and harm.

Moreover, the perfect square shape of a box further enhances the sense of safety and security with its four walls and corners, albeit not the sturdiest (but it’s okay, your cats don’t need to know that).

As long as your cat is inside the box, it seems as though nothing can sneak up behind and attack them. Your cat is completely at peace within this enclosed, cosy space. Unsurprisingly, this is probably the reason why you may notice your cat sleeping inside the box for several hours a day. 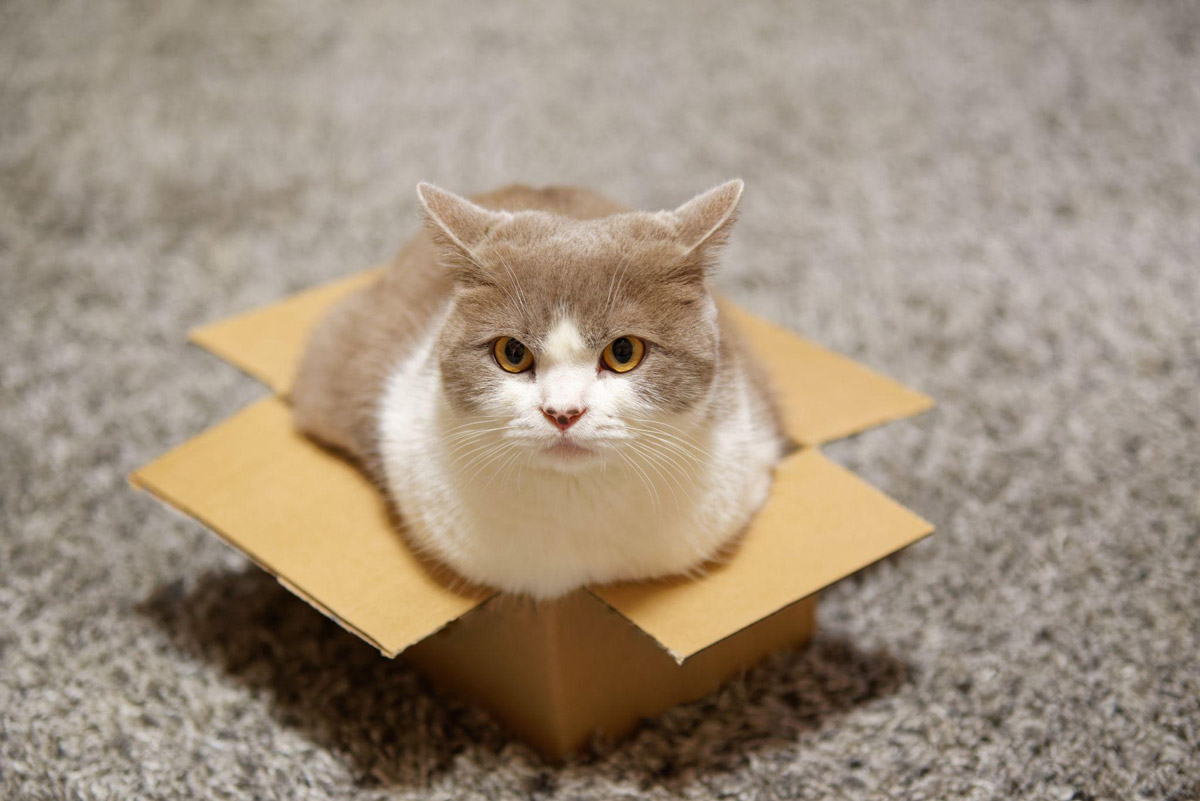 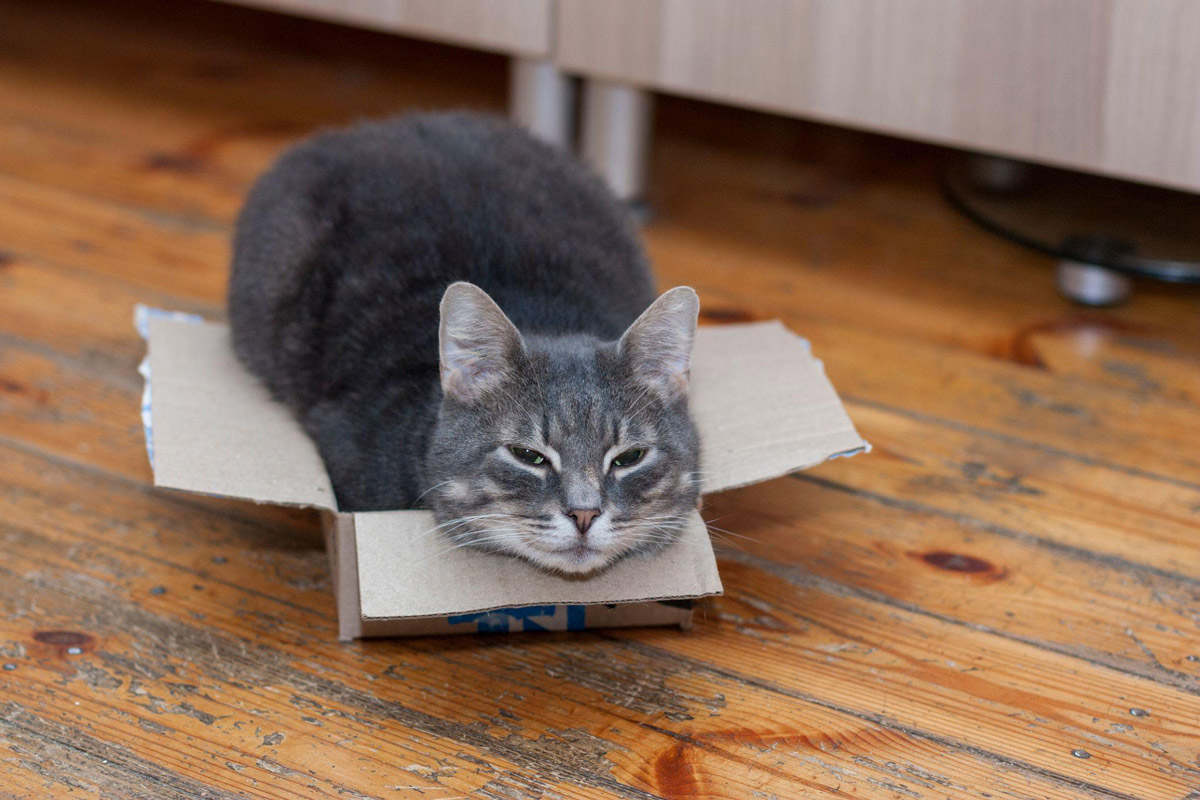 The most ironic thing about this, however, would be that in many instances, these cardboard boxes are way too small for your cat itself. But somehow, they insist and persist in squeezing their chonky and oversized fluffs into the box just to feel snug and cosy.

Cats Can Relieve Their Stress 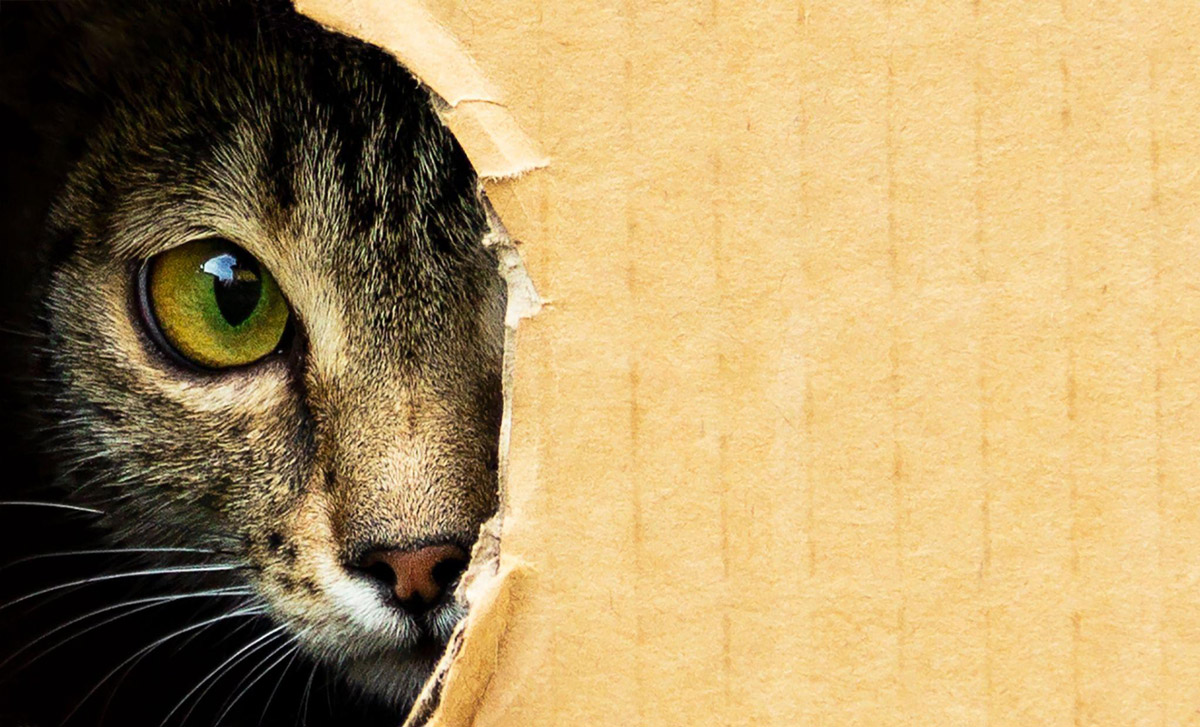 Hiding in an enclosed space is a typical response of cats when faced with stress.

As the adage goes, “Curiosity killed the cat.” No doubt, this saying has perpetuated the fairly common knowledge that cats tend to be more solitary and cautious than their frequently compared counterpart, dogs.

According to science, the size and shape of a cardboard box — as well as the darkness and serenity it brings — allows cats to feel more comfortable and at ease. The sense of security that your furkid feels within the safe confines of their cardboard box fortress helps to lower their stress levels greatly.

Not to mention, as pet owners, we’d appreciate anything that can reduce the stress on our beloved furbabies. Stress can potentially lead to several health risks and behavioural issues like excessive grooming or scratching or incurring aggression among many symptoms.

So, if the solution to calming your feline down manifests as a simple cardboard box, who’s to deny its humble merits? Bottom line is if a cardboard box brings much joy to your kitty and in turn, helps reduces said health risks and behavioural issues, then let your feline companion be.

But of course, if your cat shows persistent signs of stress, do not hesitate to bring them to any one of the local vets in Singapore.

Cats Use Boxes to Avoid Conflict 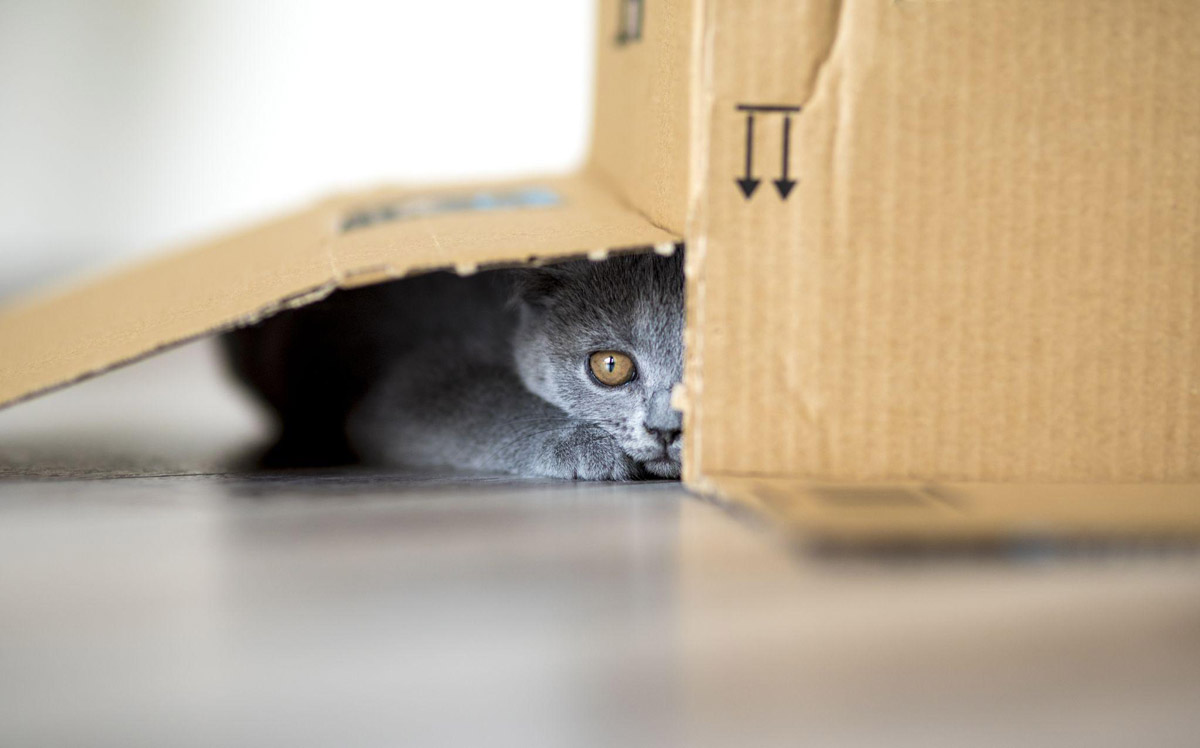 As mentioned above, dogs are usually perceived as the ‘energetic and interactive pet’ in contrast to cats which are more aloof and independent.

To be clear, cats are affectionate animals, but they express their boundaries and tolerance very well; they’ll either notify you of their boredom by scurrying away or letting out a hiss or two if they’re uncomfortable. And as you can guess by now, one such manner of their great escapes could be by them retreating to their comfort zone — cardboard boxes.

Sometimes, there might not even be an explicit trigger causing your cat to run to their cardboard hideaway. In many cases, especially in colder and temperate climates, a cardboard box acts as a great insulator to fend off the cold draught.

Unfortunately in Singapore’s case, we don’t have the fortune of enjoying autumnal or wintery weather. Instead, it becomes pertinent for cat owners to be vigilant and ensure that their cat doesn’t overheat by remaining in the cardboard box for too long.

Overheating and heat stroke are common issues in Singapore pets that many owners tend to overlook. To avoid the pitfalls of an irresponsible pawrent, read here and here on essential tips, tricks, recipes to keep your catto cool for the summer and safe from heatstrokes.

Moral of the Story? 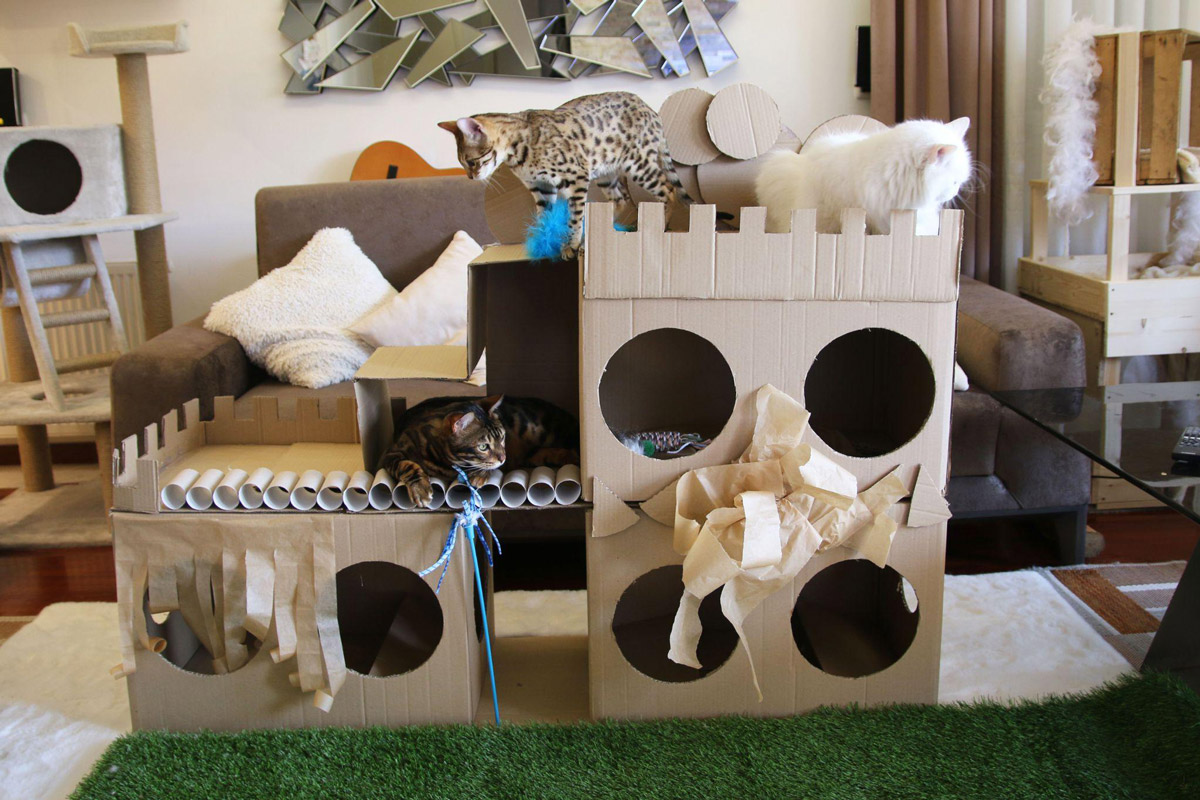 All in all, there are plenty of reasons why your beloved feline companion loves spending most of their time inside a cardboard box. No matter the reason, if that strange, lopsided, tattered paper-constructed box brings much glee and cheer to your furbaby, then why not.

Alternatively, you can turn the tables on them by creating a DIY cardboard box project! Not only does it save costs on other toy purchases, but your cat would probably appreciate this more in any case; so it’s truly a win-win situation. 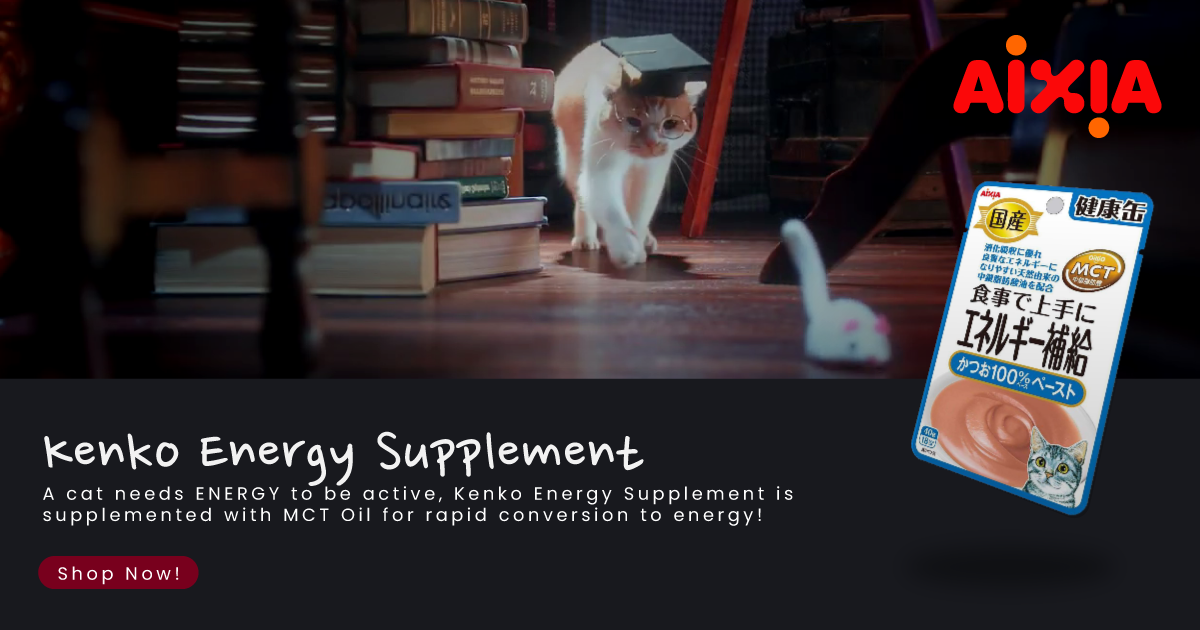