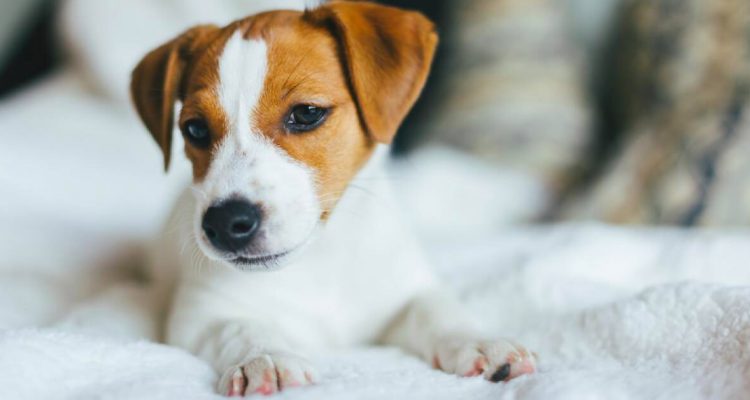 We love our furkids dearly. That’s why we’re always doing what we can to get ahold of the latest snacks and toys online or from the pet shop — as long as our pet is happy, we are too.

But besides keeping them delighted, we need to keep them safe as well, especially from silent killers like heartworm disease, which is transmitted from one infected pet to another via mosquitoes. As we all know, mosquitoes thrive in Singapore.

In order to protect your pet and ensure that he’s able to live his life to the fullest, here’s a closer look at what heartworm disease is, how your pet might be at risk, and how you can prevent it from manifesting in the first place.

What is heartworm disease?

These stringy, noodle-like things are heartworms.

A heartworm is a parasite that lodges itself in a cat or dog’s heart, arteries, and lungs. Most vets in Singapore will testify that this can be considered as a silent killer because it’s often only detectable until the condition is alarmingly severe, when long-lasting damage has already been caused to the pet’s heart, lungs, and other major organs.

If undetected and untreated early, the heartworm will thrive, growing until it reaches up to 14 inches in length, and multiplying until there are several hundred of these worms in your pet by the time he’s diagnosed. In severe cases, it can result in sudden deaths. Even if your pet is successfully treated for heartworms, he will have to live with the permanent damage caused, affecting his quality of life.

Generally, cats are less susceptible to infection as compared to dogs because they are not a natural host of heartworms. That said, some cats still do get infected, so it’s best to put them on preventives as well.

How do dogs and cats contract heartworms? 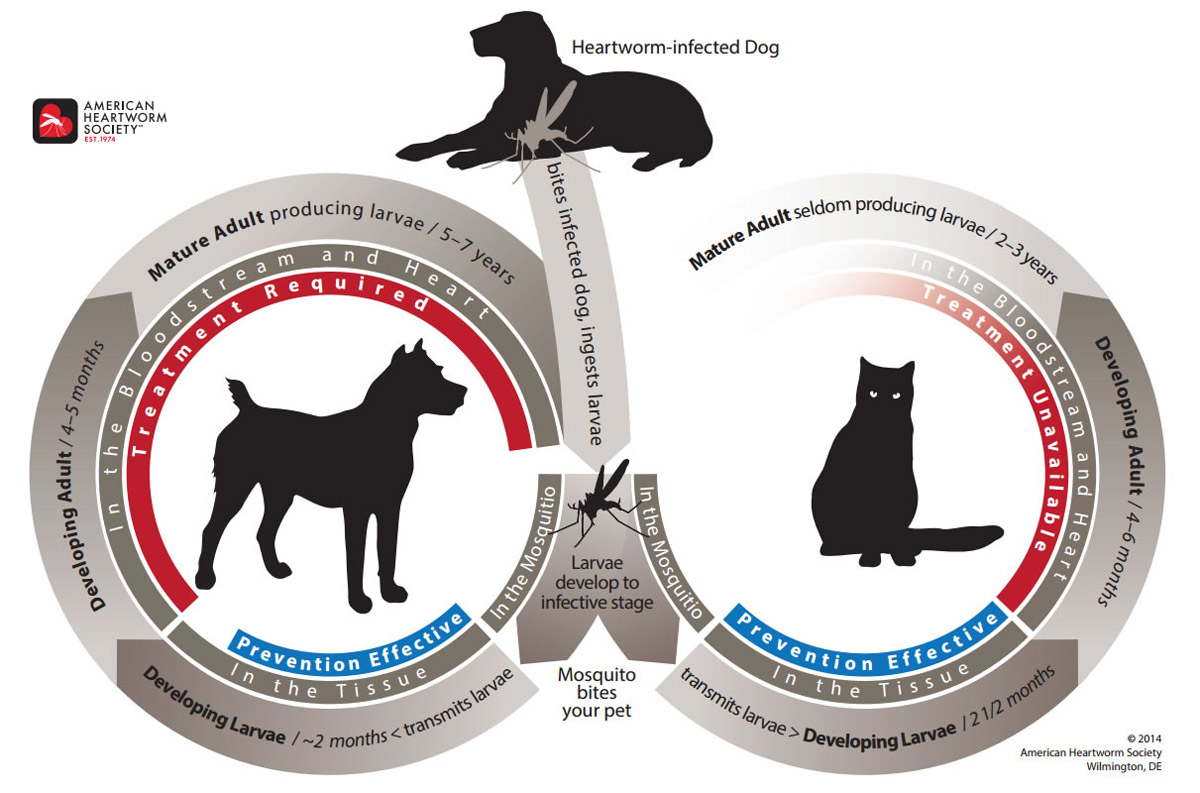 Heartworm larvae, known as microfilaria, live within the bloodstream of the affected animal. When a mosquito feasts on the blood of an infected cat or dog, it becomes a carrier for the microfilaria. The infective stage will then occur two weeks later when the microfilaria are slightly more matured, and if said mosquito goes on to bite another dog or cat during this period, the heartworm larvae will also be transmitted into that dog’s bloodstream. In about 6 months time, these larvae would have matured into adult heartworms, which can then live for another 5 – 7 years in dogs, and 2 – 3 years in cats.

What this essentially means is that any dog or cat that is not regularly taking heartworm preventives is at risk of contracting heartworm disease!

What symptoms should I look out for?

Unfortunately, it’s not easy to detect the infection in its early stages without a blood test. The more severe the infection, the more noticeable the symptoms will be, which can include:

What can I do? 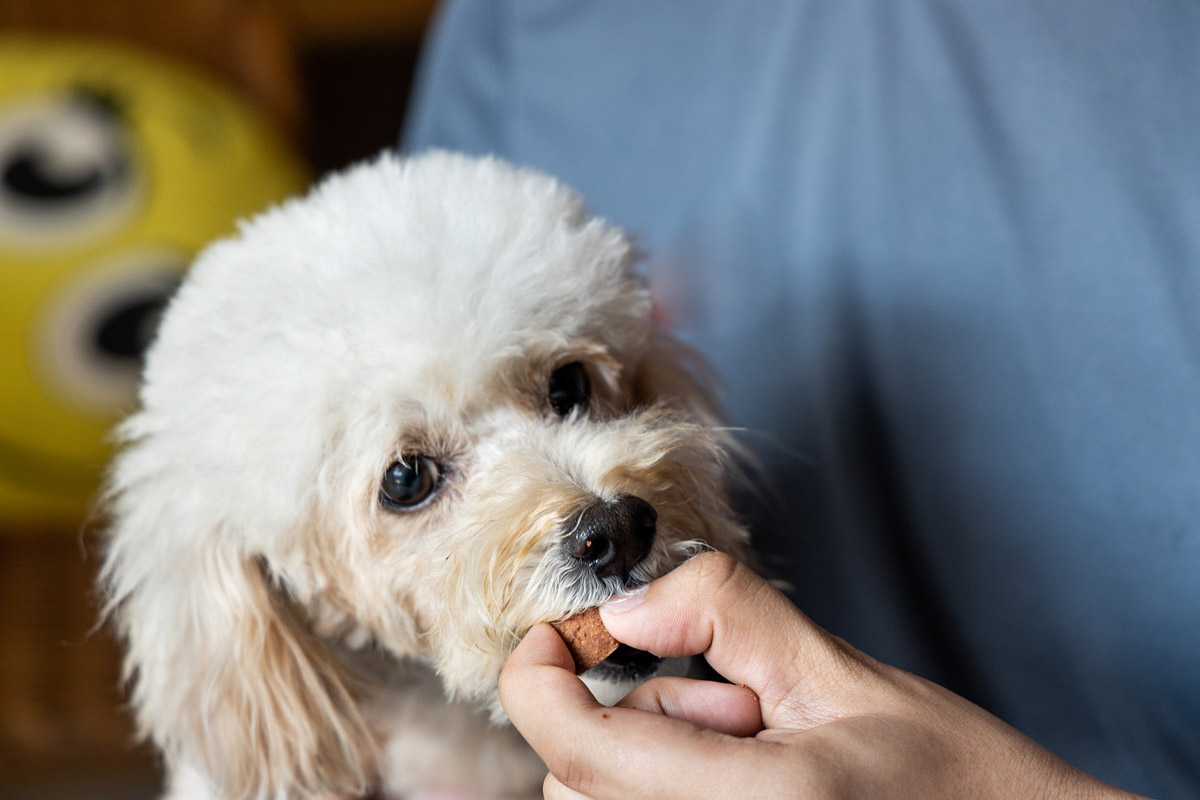 Some heartworm preventives come in chewable tablets like this!

When it comes to heartworm disease, prevention is better than cure. Treatment is often expensive and problematic with risks involved, and there might already be permanent damage caused. Furthermore, there is no drug approved for treating heartworms in cats as of yet.

If you have a puppy or kitten under 6 months old, a good cautionary measure to take would be to start him on heartworm preventives, which can either come in the form of chewable tablets to be taken monthly, spot-on topical medication, or a yearly injection. These are all readily available at vet clinics.

If your pet is more than 6 months old though, you will have to get him tested for heartworms before starting him on the preventive medication. This is a simple blood test that will have results ready in just 15 minutes, and is absolutely necessary in case your pet already has heartworm — some preventives, when ingested, can cause an anaphylactic reaction when it kills the juvenile heartworms present in the bloodstream.

On top of that, never miss a single dosage and remember to bring your pet for routine check-ups every year as heartworm disease can only be tested positive after 6 months of infection!

The control of mosquito breeding in your home is also critical. Always remove any containers that may collect water, clean out and reduce potential breeding sites.

How is heartworm disease treated? 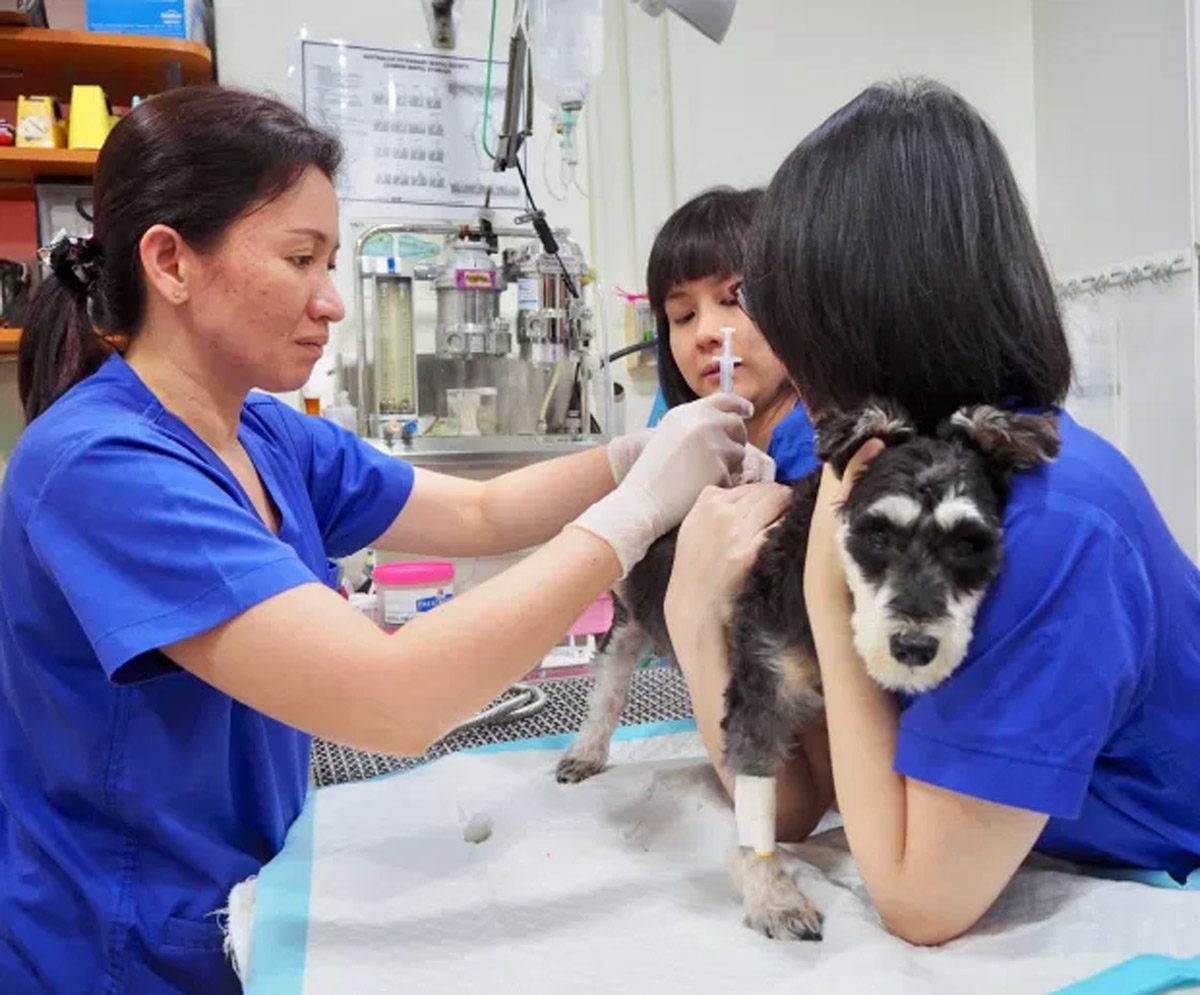 In the event that your dog is tested to have heartworm disease, take heart — most dogs can still be successfully treated, especially in the early stages. A series of injections would be used to try and kill all the microfilariae and adult worms, but dogs with advanced heartworm disease may require antibiotics, pain relief medications, and diuretics to remove fluid accumulation and drugs to improve their heart function.

During treatment, it would also be very important to restrict exercise and movement to decrease the chance of complications, especially pulmonary thromboembolism (clots in the vessels) as the worms die off.

However, as mentioned earlier, there is no drug approved for treating heartworms in cats. While one of the drugs used for treating dogs has been used in treating infected felines, it causes significant side effects and may result in acute pulmonary (lung) failure and death, and is often not recommended.

Other treatment alternatives would be to treat the symptoms of heartworm disease and hope that the cat outlives the worms, or surgical removal of the heartworms in the cat.

If you suspect that your pet might have heartworm disease or if your pet is at risk of contracting heartworms, we urge you to arrange an appointment with your vet as soon as possible for a consultation.