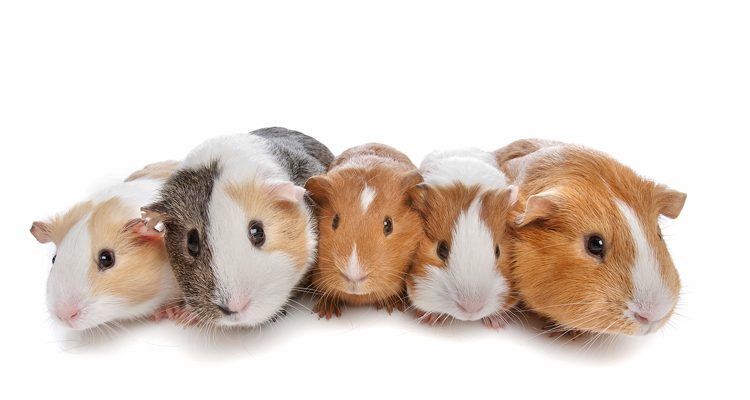 Guinea pigs have a variety of different ways of communicating using body language and sounds. Here are a few of the behaviours and noises you may see or hear from your small pet.

When a guinea pig jumps straight up in the air several times in the same spot, it’s called “popcorning”. They do this when they are happy or excited.

When a guinea pig touches the nose of another guinea pig, pet or favourite human, it is a way of saying hello.

In the wild, cavies lie motionless on their backs to make predators think they are already dead. Domestic guinea pigs sometimes use this tactic if they become very frightened. If you see a guinea pig playing dead, remove whatever is scaring it (usually a stranger or another animal), and pet it to reassure that everything is OK.

When a guinea pig lies down and stretches its body out, it is feeling very safe and relaxed.

Rising up on stiffened hind legs is a defensive movement usually reserved for other guinea pigs and is meant to warn off intruders. If the other guinea pig ignores this symbol and fails to retreat, a fight may ensue.

This sound is a signal that your guinea pig doesn’t like something. If you are petting him, then that means it doesn’t feel comfortable with how you are touching him. If he is alone in his cage, it might mean that there’s a loud sound he doesn’t like.

Normally, this sound is never used with other guinea pigs. The animal has developed it for one purpose: to ask humans for food.

If you have several guinea pigs in a cage together, you will definitely want to listen for this sound which is a warning and a signal of aggression.

Guinea pigs make this sound when they feel afraid, lonely, or in pain. If your pet makes it, then you need to figure out why and resolve the situation so your guinea pig can return to being happy.

These soft sounds may remind you of a cat’s purr, and both the cat’s and the guinea pig’s sound means pretty much the same thing: they like whatever you are doing a lot!