4 Festivals Around the World That Celebrate Animals 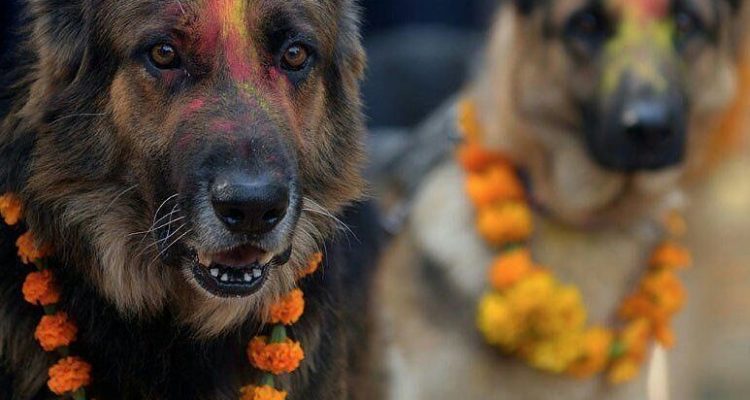 Animals are compassionate and kind beings that deserve our love and protection, which is why certain cultures and traditions around the world celebrate them. Pet parents should know that a pawty is no small affair, so read on to find out about the grand celebrations our precious animals receive around the world!

You may be familiar with Diwali, where Hindu families fill their homes with lights and colours to mark the triumph of good over evil. Known as Tihar in Nepal, it takes place over five days; Kukur Tihar, “Day of the Dogs”, falls on the second day.

The Day of the Dogs, which stems from the belief that the dog is the messenger of Yama, the God of Death, celebrates all dogs – whether domestic or stray – to make peace with Yama. On this day, besides fresh flower garlands and food treats such as meat, milk, and eggs, a dog will be given a blessing in the form of a red mark on its forehead, also known as a Tika – made of red powder, yoghurt, and grains of rice.

An ecotourism festival that occurs in the village of Velas in Ratnagiri, the Velas Turtle Festival is an annual celebration of the release of newborn Olive Ridley turtles back into the sea. However, since it is uncertain when the eggs will hatch, the dates for this festival cannot be fixed.

Instead, lucky locals and tourists will be heartened to know that to raise awareness and contribute to the conservation of turtles, they simply have to watch the baby turtles take their first steps towards the ocean life that awaits them.

Since 1994, hordes of sheep have been crossing the Plaza de Cibeles in Madrid once a year. The Transhumance Festival, which pays tribute to the ancient agricultural practice of seasonal livestock migration, is an annual event that involves singing and dancing before shepherds lead their livestock across the city.

This dates back to 1418, where a deal was struck for ranchers to make payment in exchange for permission to cross the city. To keep up the tradition, Mayor Manuela Carmena even took part in the festival’s 2018 edition!

4. Birth of the Golden Retriever

Annually, to honour the work of Lord Tweedmouth, who had hoped of a breed fit enough to retrieve his wildfowl hunts, pawrents gather at the event to celebrate the birth of their furkids’ earliest ancestors. In 2018, owners and their 361 furkids came together to commemorate the Golden Retriever’s 150th anniversary in the Guisachan Estate in Tomich, where the first Goldie was born in 1868.

Should you feel left out of the festivities, it’s never too late to host a pawty of your own for your furkid and its furiends!